WIP 16 - Around the World with Mr. Hernandez

Woohoo!!  This is a Most Satisfying finish!  And the quilt I've chosen to enter in the Summer Fair at Gen X's place.

(although I admit to a vague feeling of disquiet– because there is its identical twin to be quilted now, which is my primary WIP for the next few days. Update: here is the report of the twin's finish: UFO Shot Down near Destin Beaches) 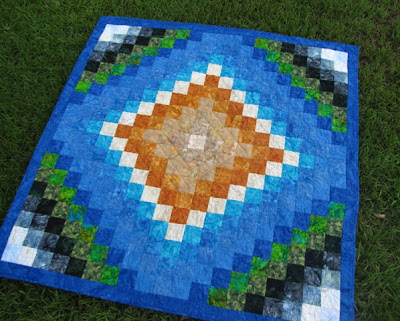 Around the World with Mr. Hernandez  (50 x 50") was created as a gift to a special teacher who was an important mentor to our oldest daughter throughout her high school years. He was also the faculty director of a most unique opportunity that she had the profound privilege of being a part of through the school’s gifted program.

[Add-in 2014: I was told by a NaGISA peer of Heather's who visited Mr. Hernandez at his classroom that he got this quilt framed and still has it hanging in his classroom. I am rather floored.]

You see, we just happen to live in the zone of the only high school in the world that was allowed to operate a real-live marine science team as a part of the world-wide NaGISA coastal study. (I believe that a high school in Japan is now also performing in the same functions.)

The school’s local team (everyone in Gifted plus the honors marine science classes) covers the collections and studies along our beach and at the stipulated depths in the near-shore waters.  The team proved itself so well at the international conference Heather’s freshman year (she was too young to be on the presentation team, so she didn’t get to go to Japan) that they earned the respect of the world’s top marine scientists.


They were lauded as an astonishing young team that appropriately carried out protocol to contribute to the world study, and also for developing a clear, comprehensive training/procedural guide for newcomers to the work. The powers that be were so impressed, in fact, that they asked the Niceville team to take on a global role in mentoring upstarting teams.

So the Niceville NaGISA program sprouted an international contingent of the most qualified students from the main group. For three years, Heather got to work on this international team as well as the local team.

Locally, she did the diving collections (often serving as a dive leader), as well as the laboratory science work that follows. As a member of the international team, she helped train a new college team at Crystal River, Florida during her sophomore year. During her junior year they went to train a new team in Crete, getting to sightsee a bit in Greece and Holland en route. During her senior year, she was one of the leaders for the work with a new team in Egypt. That trip spanned New Years 2010, so they got to celebrate there in Cairo. They found time to tour various parts of the country as well, including a trip up the Nile.

Of course, their work included scuba diving in the Red Sea – one of the very best places in the world to dive (poor baby).  I am green with envy of their trip to Egypt, which they lucked out on since I’m quite certain that the uprising and ensuing turmoil in the region not long after their trip means the school district will not approve any travel to that area for quite some time.

Heather’s team presented well enough to secure a very sizeable grant from the Sea World-Busch Gardens Environmental Excellence Award.  (Since her graduation, the team has worked in London and Turkey, and I think they’re working in the Bahamas next.) It was all a spectacular experience with continuing effects on her life as it was a key component of her scholarship consideration and enabled an unusual job assignment in the medical research labs at Washington University in St. Louis as an incoming freshman (versus a job in the cafeteria, say).

The border has commemorating material written onto it. I posted a few days ago about the really neat "Whoa!" moment while prepping that part of the quilting.  It reads:

Heather wrote a very sweet tribute for the label on the back, and I printed it with a photo of the two of them sitting together at the Nile when they sailed on a felucca: 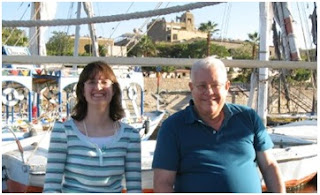 I would like to thank Mr. Hernandez for being a mentor for me throughout high school.  He really helped me to adjust during my freshman year as a homeschooler returning to the world of public school.  All the practice with presentations throughout the years in gifted class have helped me get used to presenting in front of groups of people and improved my public speaking skills greatly.  NaGISA has also been an incredible research opportunity for me, not only with the scientific work involved, but also getting me used to the diversity that the area of Niceville lacks. The world travel has also been very interesting as I have been able to see many new places and interact with many different cultures. I have also worked with people of widely different backgrounds - from my fellow students and teachers at the high school to international students and professional marine biologists.

And now I get to do it all over again.  ::sigh::  Heather's has the markings I need - tape on the pyramid steps, blue-pen laurel wreaths and column tops and bases drawn on, 1/4" tape for column verticals, and white-pen script around the border. When I pin baste the layers today, I will pin on Golden Threads pieces for the NaGISA's, kanjis, crabs, and urns. Or, actually, I will pin those on when I am ready to quilt those spots, so the tissue doesn't tear while I'm manipulating the quilt for free-motion work. I alternated between a floating open-toe foot and my walking foot, but it was all done at my table-top. I used Sulky variegated threads, which quilted like a dream. Golden tans for Egypt, silvers for the wreaths, blacks and grays for the columns and urns (at first I was disappointed at how some of that faded too much into the colors so that parts of the columns and urn seemed to disappear, but that quickly grew on me as this is how the ruins really are anyway), and blue for the water and the border script (I'm not happy enough with my stitch regularity yet to do that in high contrast, so I stuck wth the medium blue on the dark blue fabric).  It all turned out so perfectly.

~*~*~*~
Thematic quilting takes a long time! For breaks from that intensity, I worked on the embellishments for "Sailing," and helped Becca with some more piecing on her mom's "Lori's Irish Butterflies." 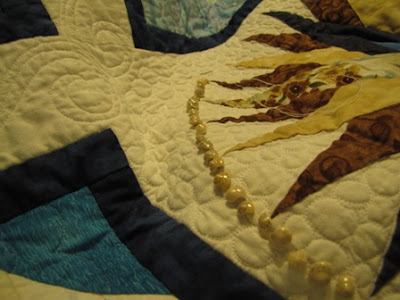 A big "Thank you!" to Lee at Freshly Pieced for hosting WIP Wednesdays
It really keeps me motivated to keep those UFOs going! (Go check out what everyone else is doing - there are some really neat projects out there!)

Also, Check out my BOMs AWAY Mondays regular link-up.

Email ThisBlogThis!Share to TwitterShare to FacebookShare to Pinterest
Labels: 2011, Around the World with Mr. Hernandez, Finishes, WIP