BOMs Away - Petals on Water Reflections 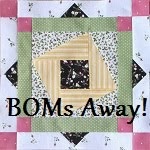 Welcome to the link-up for BOMs Away Mondays!
Where we share what we're doing on a BOM-type project
so they don't stall out in UFO-land!
(Linky at the bottom.)
I was going to do the Month 5 blocks for my Water Reflection BOM, and noticed that I'd completely forgotten that the Month 4 blocks are supposed to have white petals appliqued onto them.
99.5% of the time, I do my applique by the backbasting method. These blocks have thick seam points, though, where the petal points congregate, and I didn't feel like fiddling with those in the basting.
So I pulled out my freezer-paper applique tools and got 32 petals prepped. (I'm not convinced that the fiddliness of this method was less finicky than the backbasting would have been. . . )
Half of them are pinned on. I haven't used my little applique pins for ages and ages! They're so itty bitty! 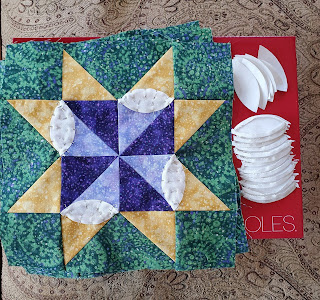 Not sure how long it'll be before these are all stitched up, as I have several labels, hanging sleeves, and bindings to work up in the next two weeks.

Click here to enter
Posted by Lynette at 1:46 PM 2 comments:

BOMs Away - From the Heart ~Flimsy Alert~

Welcome to the link-up for BOMs Away Mondays!
Where we share what we're doing on a BOM-type project
so they don't stall out in UFO-land!
(Linky at the bottom.)
It was 88 degrees yesterday afternoon when we took this photo. . .
My "From the Heart" BOM quilt top is completed!!
Pattern is from The Quilt Company, designed by Arlene Stamper and Melissa Harris 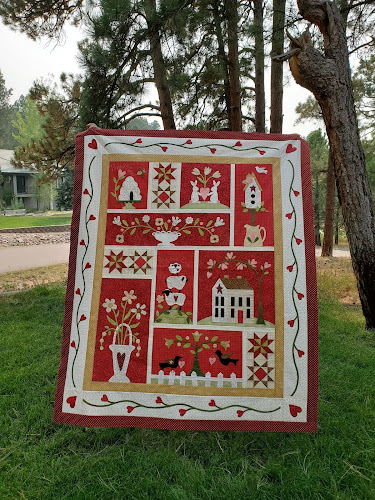 . . . and now this! We're supposed to get at least 6 inches by suppertime.

Colorado weather is always entertaining!!
Truthfully, though, this weather is a Godsend. We've had terrible wildfires in the Rockies for 4 or 5 weeks, now. Six or Seven major fires in Colorado alone, and our skies that are usually technicolor blue have been brown the whole time.
Supposed to be like this: 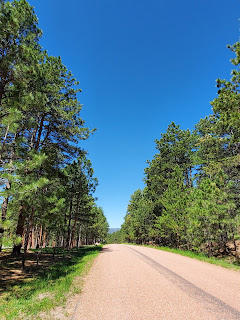 But it's been like the following photo since late July/early August. There's a mountain RIGHT THERE. Four blocks gets you to the hiking trail! 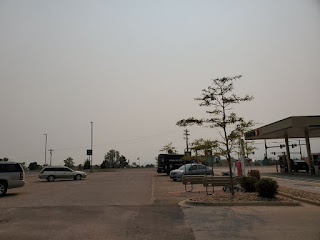 It's been awful. It keeps your sinuses messed up and angry, and makes you cough every so often, which freaks people out if you're at the store. People with issues like asthma and COPD are having an especially difficult time. Seems like we wear our masks as much for the smoke as for the pandemic.
:(
The worst part is that all but 2 of those enormous fires have been human-caused. Come on, people!! Get with the program. Drought. Fires. FIRE BAN. Knock it off with your stupid selfishness, and keep your smoking out of the forests and stop ditching patrols so you can sneak in a campfire. And what the heck??? California has also been having terrible, TERRIBLE fires this year, and one of those, forcing many thousands of people to evacuate, was caused by someone setting off pyrotechnics FOR A GENDER-REVEAL PARTY. What the heck??? Those parties seem pretty excessive to begin with, but who in their right mind thinks it's anywhere near an OK idea to set off pyrotechnics in a drought zone that's already besieged with record-breaking fires?? Please, PLEASE use an overabundance of caution in our situation, everyone.
Does anyone else wonder how much longer we humans will be able to breathe on this planet with all the crazy wildfires we have all over the planet burning up so many oxygen-producing trees, and the Amazon being continuously torn down for "development"?
Anyway, I apologize for running late on BOMs Away. We had to make an unplanned emergency road trip up to Nebraska to help Scott's folks.
What's up at your end?
~*~*~
How about you? Has any BOM type work been happening there?
Sure would love to see!
Kate over at Katie Mae Quilts has joined me in hosting this meet-up,
and linking up from either end puts you on the party at both sides.

Click here to enter
Posted by Lynette at 9:05 AM 2 comments:

Email ThisBlogThis!Share to TwitterShare to FacebookShare to Pinterest
Labels: BOMs Away, From the Heart

BOMs Away Monday - Beachwalk is Moving Right Along Now!

Welcome to the link-up for BOMs Away Mondays!
Where we share what we're doing on a BOM-type project
so they don't stall out in UFO-land!
(Linky at the bottom.)
Hey, hey! This quilt is getting close to a finish! 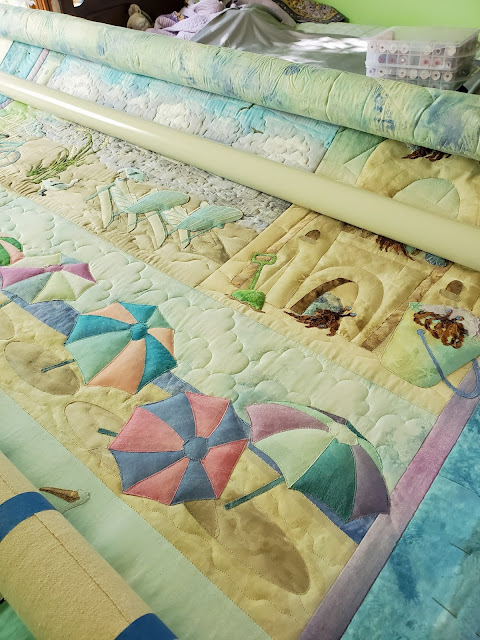 I have only 1 and 2/3 panels left to quilt on the Beachwalk BOM, that was sitting as a UFO in my Flimsies Closet for a good eight years. I'm so glad it called to Devon for her wedding quilt! 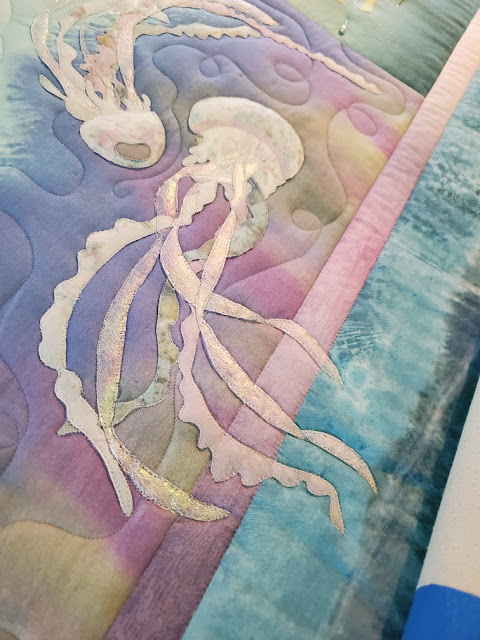 I'm very happy to report that the final quilting is going So Much Easier than the trapunto work did. For one thing, all but a couple of pieces that had lifted off were stitched down during that first stage of the quilting, so, of course, this second stage is much simpler to attack just on that account.
TIP FOR LONGARMING FUSIBLE APPLIQUE LAYERS:
The longarm ball point needle - FFG - works wonderfully on the multiple fused layers, with no cutting of threads, and I haven't had any issues at all with the needle getting sticky and doing skipped stitches. Nor am I seeing any batting punched through on the back. I've used the size 18 for the Glides and Aurifils, and size 16 for the Microquilters. I do notice that the non-cotton threads work more smoothly with this fussy fusible that didn't like permeating the fabric which hadn't been prewashed.
~*~*~
How about you? Has any BOM type work been happening there?
Sure would love to see!
Kate over at Katie Mae Quilts has joined me in hosting this meet-up,
and linking up from either end puts you on the party at both sides.

Click here to enter
Posted by Lynette at 5:48 PM 2 comments: