I have two big finishes from Thanksgiving week to write up, both of which are Kelly quilts. 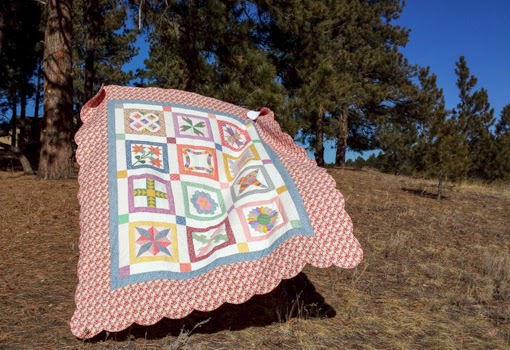 She called this one "Egg Money Sampler," pieced it in 2006, and was largely finished hand quilting it when she died in 2008.

I started working on this project of hers in earnest at the end of July this year. What you see to the left is the amount I needed to finish for her. It looks so small here, but it's really 18" by 97"!  I needed to trace the feather motifs for the white sashes and the feather wreaths for the corners from the other parts of the quilt. I did that with waxed paper and CAREFUL use of a sharpie. Then I could lay it under the top layer over a light and pencil it onto the top.

Kelly had been working it on a large frame, and I used a lap hoop. I had meticulously pin-basted the unquilted portion, hoping there wouldn't be a visible tension difference between her work and mine. There wasn't.  :)

I know now that doing hand quilting is not my cup of tea, but I sure do love the concept! And looking at the back is soooo fun. Working on that red print made my eyes goggle every time, and while it's handy for hiding the skill difference between my work and hers, it doesn't show the feathers very well at all. 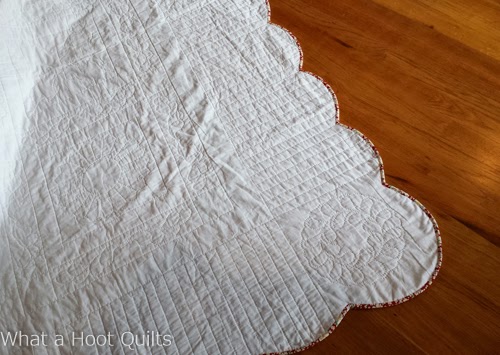 After all that work, I had to stitch her scallop border, which was a huge task in itself. No cheating and putting a straight finish, because Kelly had sewn the binding onto the scallops of the top before she started the quilting. Scalloped edges sure are nice, though, aren't they?  This quilt measures at 97 x 102 inches, and I'll send it out to her eldest son and his wife.

These are some of my favorite blocks... 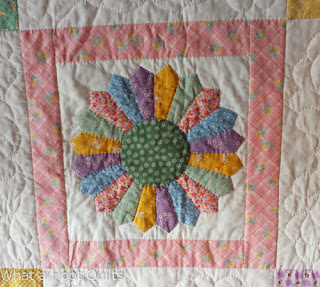 Wish I knew this one's name:
(Thanks to Claire at KnitNKwilt for sharing that this is known as "Rocky Road to Kansas" per the Barbara Brackman encyclopedia.) 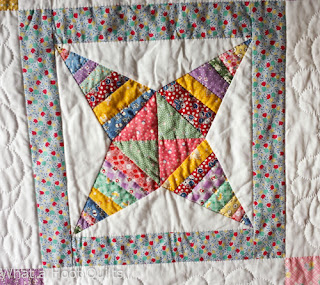 And on this one she quilted in the construction info:
"Egg Money Sampler pieced 2006, quilted by Cheryl Vella 2007-8"
(She went by "Kelly" with relatives,"Kellene" with her mom, and "Cheryl" with everyone else.) 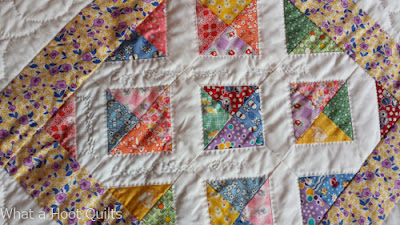 ... is the first of her two Joseph Smith quilts that she was doing as part of our personal BOM game (see the write-up for my Dragonfly Party quilts). 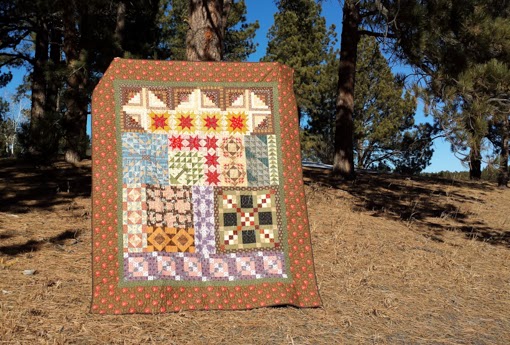 The style is totally not mine, but I really enjoyed doing this for her, and the stories behind the different blocks are a fun expression of her faith's history.

I started finishing the piecing of these two quilts for her at the beginning of this year. Most of it was left to be done, but she had already set aside which reproduction fabrics she wanted to be used for each of the months' block work. It's good that she did that, because we have entirely different tastes, and at the beginning, I could never have put things together the way she liked. My eyes want a lot more contrast between block elements and more cohesion in the overall color scheme. It was a real task at first working in her choices, but over time my eyes and brain started "getting it" and while I still wouldn't choose the style as my preference, I can work with it in peace.  :)

It's funny, because when I ordered batting for these, I ordered my non-wool favorite of the 80/20 Hobbs Heirloom blend. Two days later I kicked myself, thinking I should have gone with 100% cotton instead, since all her fabrics are period-appropriate. You know what? For the first time, the shop messed up and accidentally sent 100% cotton instead of the blend! I just love serendipitous things like that. Em calls them Godwinks, and I'm inclined to agree.

Kelly was strongly traditional in her quilting preferences, so she would have chosen a traditional all over quilting or ditch work on everything. While I worked hard to stick to her fabric choices on the blocks she had not yet pieced, and shopped for borders in period-appropriate fabrics that would have reflected her color style, I made her a deal on the quilting: I would go with the free - motion custom work I love doing, but would base everything on cultural and architectural motifs from that period of her church's history.


I'm super happy with how it all came together!

Once the quilt was stabilized, I started in the body of the gift part. I marked lines alternating 6" and 4" down the section and then wrote in lyrics on the larger spaces from the LDS song, "Praise to the Man." It's particularly nice that the end of the lyrics I used includes "Death cannot conquer that hero again," because LDS folks place strong faith in seeing their loved ones in the afterlife, and my aunt (to whom I'll send this quilt) has had to bear the loss of her husband and 3 of her 5 children due to a congenital heart problem. I stitched these lines in a 28 wt cream Aurifil, top and bobbin. 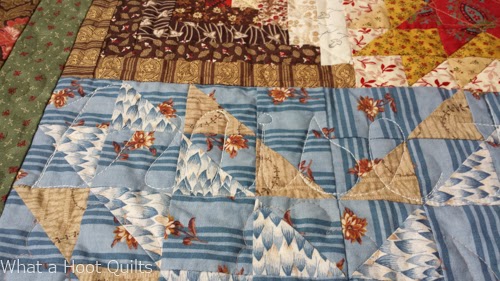 (It's easiest to see the alternating effect from the back.) 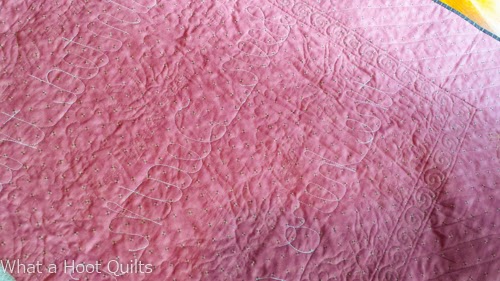 (Let me interject a note to folks unfamiliar with Mormons - they worship God the Father through Jesus Christ. They do not worship Joseph Smith - rather, they revere him and his initialization of their restored faith. It's quite different from the Catholic worship of Mary and canonized saints, as they do not pray to Smith, but only to God.)

Back to the center of the quilt...

In the narrower lines between those lyrics, I free-motion quilted a pictorial representation of another song commemorating Joseph's visitations, "Oh, How Lovely Was the Morning." I used an alternation of trees for the grove and a beaming sun. This is done in a tan So Fine, top and bobbin. 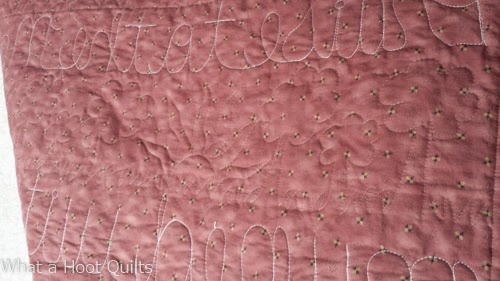 Next I tackled the green stop border. It had been ditched during stabilization with a green Guterman thread I had and a So Fine tan bobbin. Now I free-motioned an adaptation of a spiral motif in the architecture of the Kirtland Temple, using the same thread combo as the ditching. Kirtland was the first temple built by the LDS, and Smith was instrumental in its design and ornamentation. 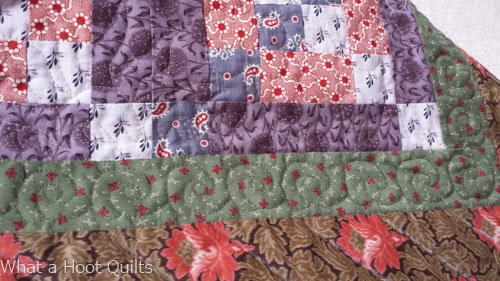 Next I moved to the gift bow/crown portion of the interior. 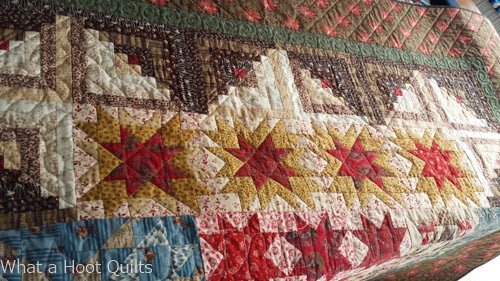 First I put in the inner division line to accentuate the larger shape created by the placement of the light/dark halves of the log cabin blocks. Then I ditched the stars and put a symbol in their centers that Smith used for the Melchizidek priesthood. 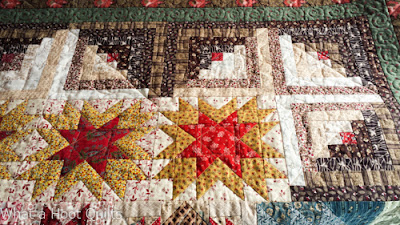 On either light side around the stars, I quilted in some leafy vase vines very loosely based on a tree of life in a vase in the Kirtland architecture. 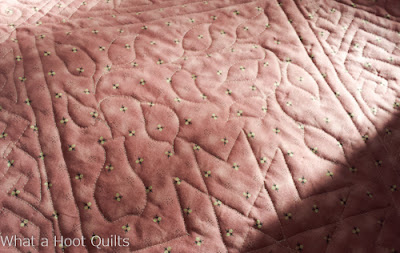 In the center light portion, I put in some gold plates and the sun, moon, and star symbols that were so ubiquitous in the early LDS symbology. For all of the light section, I used a tawny gold Aurifil with the tan So Fine bobbin. 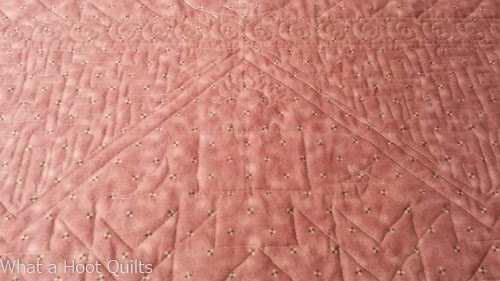 In the dark area (seen above the triangle in the last picture) I echoed the division line, then free-motioned continuous mazework since mazes appear frequently in the Kirtland architecture. Dark brown Aurifil with the tan So Fine bobbin. 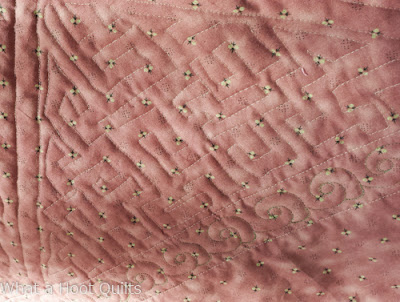 It was finally time to move to the outer border. Here I chose to go with larger figures from architecture. I printed images from the Internet, stapled then on top of stacks of Golden Threads quilting paper, then traced the outlines by free-motion work with no thread. Voilà!  Templates for both quilts! 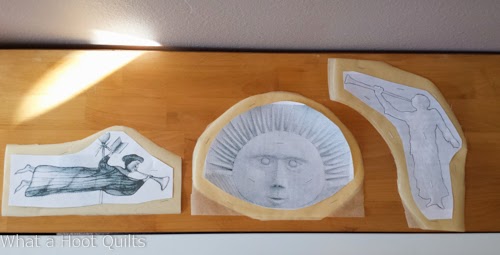 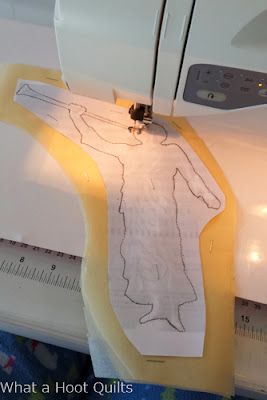 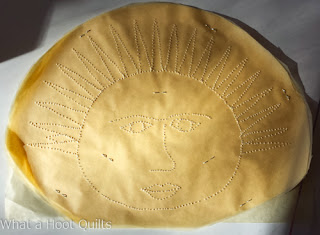 You stitch right through the paper, which is easy to pull off afterward. It's a wee bit sturdier than gift tissue - maybe halfway between that and waxed paper. 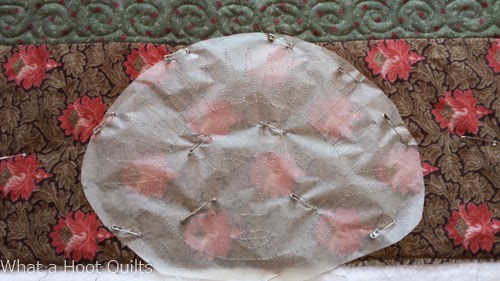 At the center of each of the four quilt sides, I put in the sunstone image from the Nauvoo Temple. This was the second one they built, and although it was not completed before Smith was martyred, he was instrumental in its designs.  I used a silver variegated rayon King Tut I found in my thread stash, with a light gray Aurifil bobbin. This is the bottom one. The others are oriented with the chin at the green stop border. 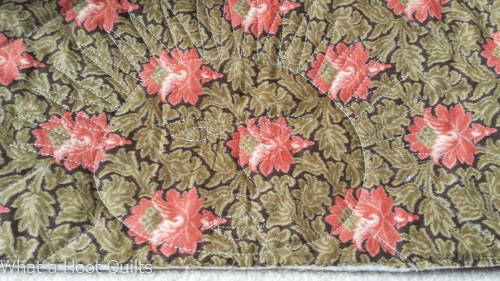 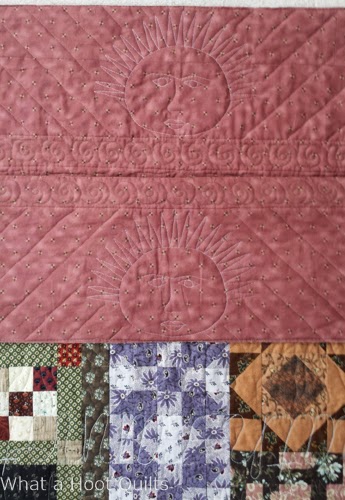 On the bottom corners I quilted in the original Angel Moroni statue for the golden weather vane on the Nauvoo temple. 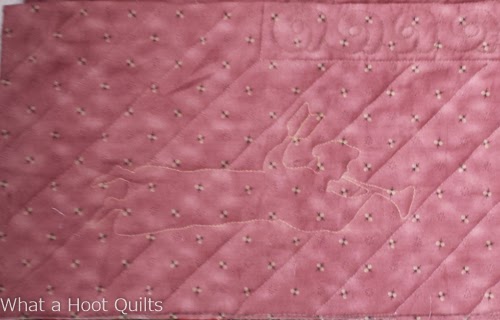 In the upper corners I pulled in the later upright gold Angel Moroni steeple statue that is familiar to today's LDS congregations. 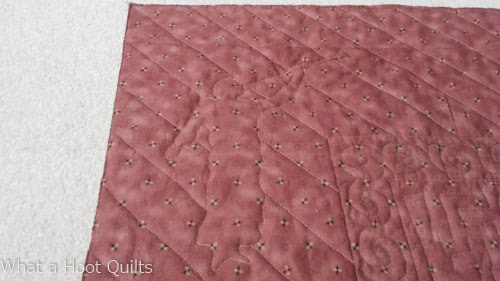 On all of these I suffered through the nasty tension and breakage issues of a Coats and Clark metallic gold thread with a bright gold Aurifil bobbin thread. My machines did NOT like that metallic thread one single bit. Definitely have to buy a different brand next time that's designed for quilting. 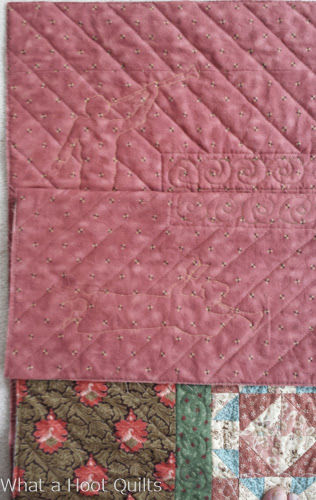 The final task was to put in the border's fill between these motifs.  I used the dark brown Aurifil/tan So Fine combo from before and put in slanted lines that used the angle of the lines on the bottom of the Nauvoo sunstones. I just chalked those in with my rulers and then free-motioned them. I really like the effect of the slight wobbles rather than a strictly straight effect I would have gotten if I'd switched over to my walking foot. Something about it just fits better for this instance.

So - I still have the second twin of Kelly's Joseph Smith quilts to pin baste and quilt. Since I detailed the quilting here, with that one's report I'll share the fun history backgrounds of the blocks the designers chose to use.
I'll do that in January, and will send it to her brother. He's also very devout in their religion and loves church history. But her mother gets this first one as soon as I get a photo file from Kelly's husband and print out a label, just in time for Christmas! I'm also going to take all the block stories (they came with each month's pattern) and have them spiral bound together into two sets to send with the quilts.

Linking up at
FMQ Friday


TGIFF is at Quokka Quilts this week

Link-a-Finish Friday
Posted by Lynette at 10:52 AM