Welcome to my Link-Up for BOMs Away Mondays!
(We'd love to see the BOM you're working on lately.)


Hi there! I really got cracking with BOM catch-up this week. Fist, a couple of Baby Janes –

Next, I finally got back to work on my Patriots in Petticoats. I adore history related projects, but the quilt is not in my colors, and the blocks are so terribly fussy, that I kept passing them up when I actually got to work on a BOM.
So here’s the August work that I was too busy to get to while driving the kids all over the country to their school locations: 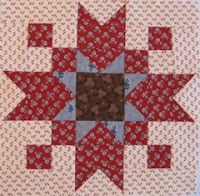 August Gal #1 was Marcy Otis Warren, who was known as the “Conscience of the American Revolution.” She wrote propaganda plays to stir anger against the British and Loyalists and maintained friendships with Abigail Adams and Martha Washington. 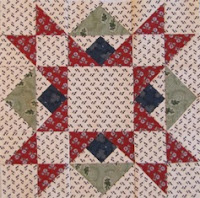 August Gal #2 was Hannah Arnette. This fiesty lady burst in on a group of men (including her husband) who were talking about deserting the patriot cause and accepting a British offer, chewing them out so ferociously that they all reconsidered.  (LOL)


I also sewed September’s work. The center medallion got passed over while I was too depressed from my first experience with an empty nest to do much more than keep afloat with school work and housework. 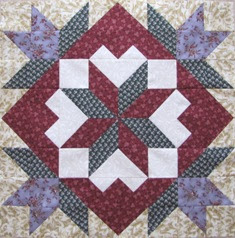 The 24” Medallion is appropriately dedicated to Martha Washington. Martha could not have had an easy married life, as her husband was always gone to meet the needs of the Army (and later, the young new nation). Still, she was highly celebrated and traveled each year during the war to be with her husband at camp. She cared for him and acted as camp hostess at Valley Forge, and supported the recruitment of women volunteers for the Continental Army. Like many other women in the colonies, she lost a son to the war.
And, believe it or not, I also did the October work - just in time!


The log cabin setting blocks go to Mary Lindley Murray, the Quaker woman who held up General Howe and the other British officers by inviting them to tea so that the American troops could make a good retreat from New York after the Battle of Brooklyn. I’m sure her Loyalist husband was not amused!


~*~*~*~
What interval project have you got going? Weeklies are welcome along with regular projects that you’ve broken into monthly units, and –of course- true BOMs.   Share your eye candy and show off your progress since the last time you linked up! There are some wonderful monthly and weekly projects going on out there. You guys amaze me. :D

Email ThisBlogThis!Share to TwitterShare to FacebookShare to Pinterest
Labels: BOMs Away, Dear Jane, Patriots in Petticoats