TGIFF is Here Today, and It's All About the Dog :)

Hi! Welcome to this week's TGIFF link-up!
Have you finished something lately that you'd like to share? Link up at the bottom of this post, and be sure to visit some of the other links to find some great eye candy and help your fellow bloggers celebrate. :D

I'm really bummed that I couldn't get this quilt completely finished in time for this post, despite tons of overtime work on it, but I'm super thrilled that the cameo portraits are not only FINISHED!!!, but that the whole process worked! So here is "Lori & Aliya" with that part all done: 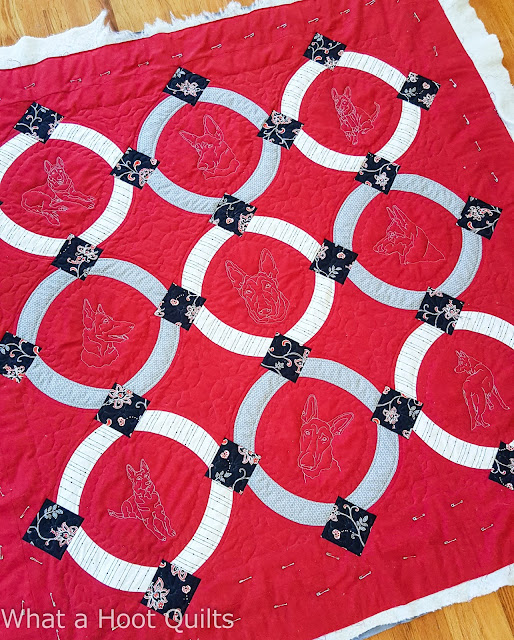 It was a long, difficult process to achieve those portraits!

Lori sent me about 11 photo files of Aliya that she totally loved. I lifted a couple others off her Facebook page. Played around with cropping/sizing and pasted images into a 9x9 grid until the two of us both liked the images chosen and the grid placement for them.

Here are a couple of the cameos and the photos they came from: 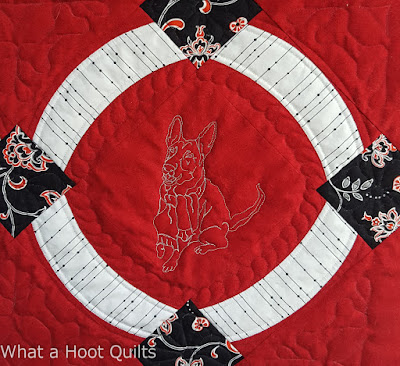 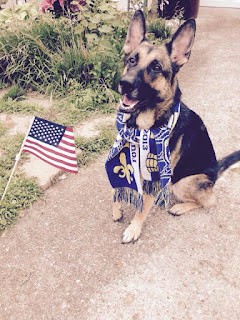 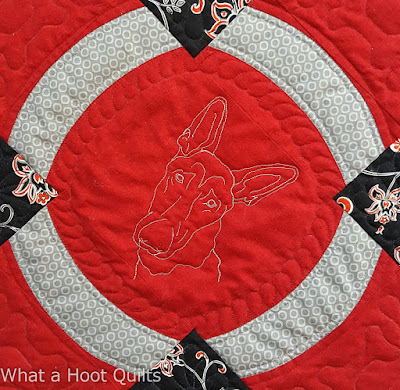 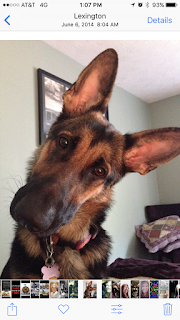 I needed to create Golden Threads quilting patterns for those nine chosen photos, but I am not an artist! Any drawing task is excruciatingly slow and involves a large amount of erasing.

I made them by using this tutorial to edit digital photos at the free online app, PIXLR, so that they were as close to coloring book images as possible. 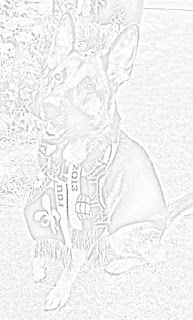 Then I sized them up in a Word document, printed them out, and traced in the lines I thought I'd like with a fine-tip Sharpie. 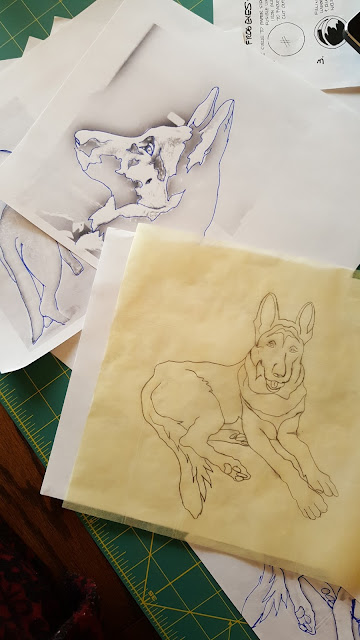 Finally, with the photo file open in front of me and a sheet of the Golden Threads taped over the marked-up print-out, I traced the lines I really wanted to quilt in. That part was done in pencil, because I had to erase so often, and it was tricky to capture a good likeness that conveys the gist of her markings, but also plays nice with stitchability and with the compression/loft effect of batting. This pattern-making stage took an entire week of several hours each day to get to where I was happy with all 9 in the set. 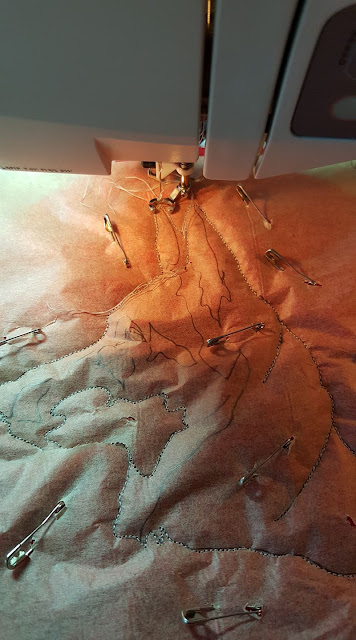 There were a remarkable number of free-standing details to quilt it, and on the full-body images in particular, I wasn't sure that the Golden Threads method was going to pan out well with the minky backing. Minky makes everything so much more springy to work on, and I worried that the paper would get prematurely torn and back-tracking or closely-spaced lines would just get all goopy and messy. But it worked just fine! 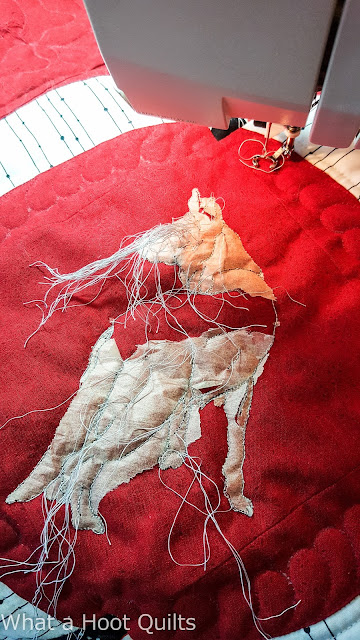 That one up there was one of the least-messiest, tails-wise. Cleanup of the quilting to this point took just over 10 hours. Details were too close to use backstitching, so everything is secured by tying before tucking. I used a lightly-variegated gray King Tut thread in 40 weight for those. The rest of the quilting is done in 50-weight Aurifil threads to match the fabric colors.

This is a special request commission quilt from a good friend. She wanted a quilt to feature quilting with bones, paws, traditional feathers, and quilt-outs of favorite photos of her beloved German Shepherd. That was quite the creative challenge! But you can see how beautifully it's working out on this shot of the minky back: 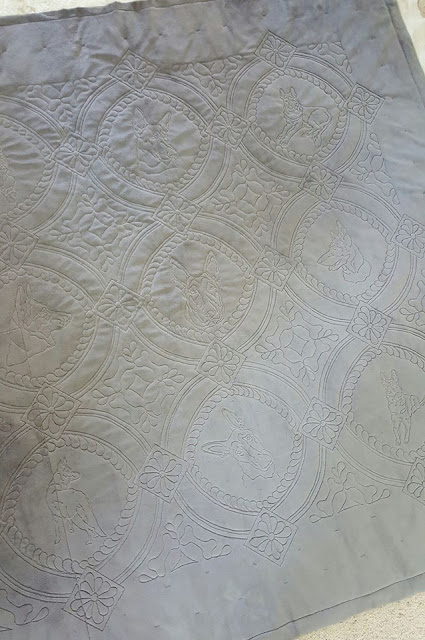 We went with a variation of the Metro Hoops pattern to have these feather-framed cameo areas (which will get cross-hatching filler around the figures). I chalked an inner border "bumper" line inside the rings to do the feathers freehand against the ring's inner edge.

. . .and I worked up motifs for the "between" spaces that get the bones in for her. These got marked with chalk, tracing a curvy-diamond and a bone stencil that I cut out of a file folder into the area after I'd chalked in a register crisscross. The plumes just got free-handed as I went along. 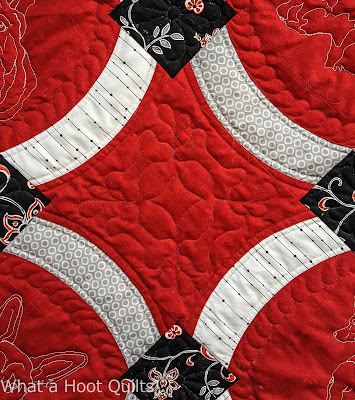 The portraits will get cross-hatching between them and the feather rim, and the ring arcs will get some curly-q's down their centers to further stabilize them. The outer border will have life-size quilt-outs of Aliya's paw prints superimposed on top of traditional feathers, as you can see in this shot of my acrylic overlay sheet (this is what I lay over a quilt top to play around with quilting ideas when I can't discover a scheme right off the bat). 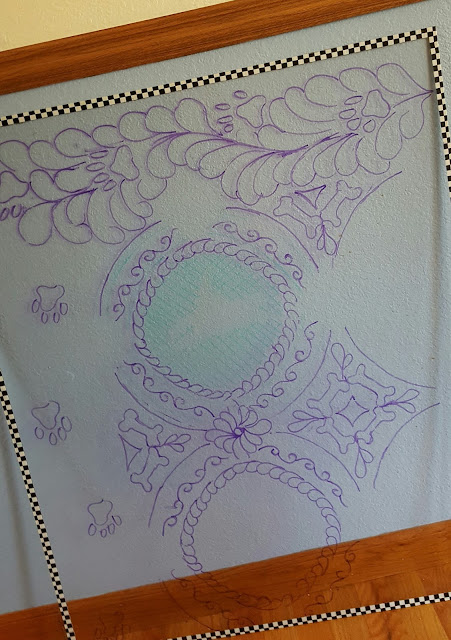 I'm sure I'm not the only one who can quilt things a lot prettier than I can draw them. Does that happen for you, too?

I'll cut a file-folder stencil for Aliya's paw and put those in with a blue water-erase pencil, along with a spine line for the feathering. I'm leaning toward all of that work being done in the red thread, but might possibly do the paws in the King Tut. I'll figure that out when the fillers are in and the paws are marked.

I apologize sincerely for not being able to finish this 100% for y'all. I'm still learning to correctly gauge how long certain jobs will take, and that cameo work totally blew my estimations away.

But now it's your turn to show us what you've finished! I love the variety that comes through every week and look forward to seeing your link:

An InLinkz Link-up
Posted by Lynette at 1:40 PM