Welcome to my Link-Up for BOMs Away Mondays!


(We'd love to see the BOM you're working on lately.)

Well, I am now a Colorado Girl!  [Weekly Link-up is at the bottom of this journal entry]


A family of 5 creative people in a house for 15 years accumulates a LOT of stuff!  We packed every bit of non-sitting space in all of the vehicles, crammed that UHaul 26-footer for all its worth, and still had to add the largest UHaul trailer to get it all together.


As we were pulling out, our youngest said "We're a train, Mom!" It made me think of our ancestors crossing westward in wagon trains, and our convoy fit the analogy quite well, I thought:


Marissa and I had the Hand Cart in the lead - along with all 4 cats! (yes, *that* was interesting) 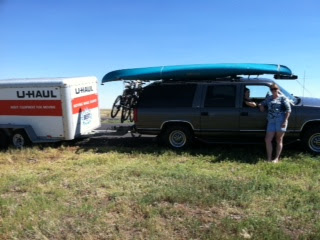 Devon had the little Pack Mule 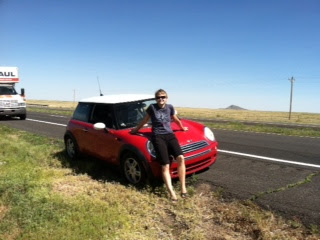 Heather and Grandpa had the big Pack Mule (THANK YOU, THANK YOU DAD FOR FLYING OUT AND HELPING US!!!) 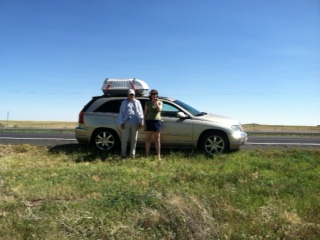 And Scott drew up the rear with the Covered Wagon (better known as "The Squid"), pulling the final mule. 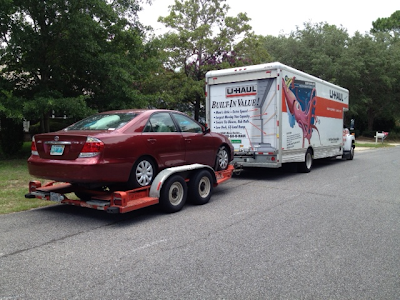 Convoy driving across the country can be quite demanding! The second night, our 18yo said, "Mom, I had a Wooten Moment! I always wondered what the heck was wrong with you guys, how could you be so tired when all you did was sit and drive all day. Well - - I Get It Now!"  hehe


That Squid was funny, but it sure was AGGRAVATING, too. The darn thing got a blow-out THREE times during the trip - always the same tire. I was expecting something, as the tires were almost completely bald (shame on U-Haul!), and Grandpa said the subsequent blow-outs were undoubtedly because they simply put a new tire on the one that had blown, with a full inch more of tread than the other 3 tires on that axle, so that the new tire had to carry far more than its fair share of the load. It was truly maddening. But it did provide some awesome photo ops:


The first time we had a great place to wait during the 2-something hours it took to get the roadside service: in the Sunday-empty parking lot of the Arkansas State Highway Patrol headquarters.  LOL 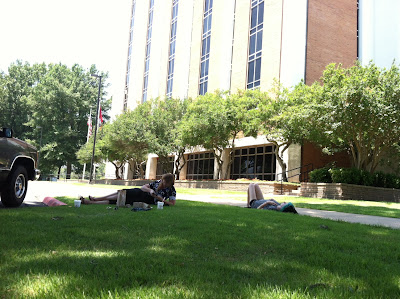 The second time was on a busy stretch of Interstate with no good waiting areas, so Scott sent us on ahead to the next hotel. He caught up with us at 1 am.  :(  He did get some entertainment, though, watching the 2-car speed trap that the Oklahoma highway patrol set up near him.


The third time was in the BOONIES of the northeast corner of New Mexico. We watched a train go by. 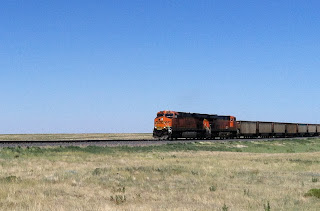 . . . and Scott sent the rest of us 45 minutes ahead to pass some time at Capulin National Volcano.

We pulled into Colorado Springs at midnight just as the fire was approaching its apex. This is what the mountains looked like the next day across the city. And each afternoon for three days, the wind blew that cloud of smoke all the way across the city to encase us all.


Fortunately, our apartment was on the opposite side of the city from the mountains, and our storage unit was across the Interstate from the threat zone. Others were not so fortunate at all. The whole time we were unloading at the storage facility, other families were arriving and unloading everything they had been able to save when they had to evacuate their homes. Over 30,000 people were displaced by this fire!!  If we had been able to use the base temporary facility (cats kept us out of it), we would have had to evacuate 12 hours after arriving. Almost 350 homes were burned this week. It is heart-wrenching to see in my new home-town.


A scenic pull-out on I-25 just north of the city was a favorite place for people to watch horror-stricken as the helicopters did everything they could to save the homes. 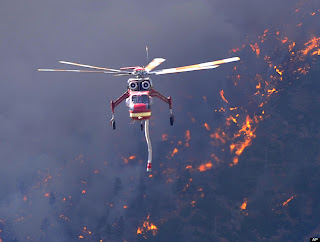 But the neighborhood we'd wanted to buy into is mostly gone: 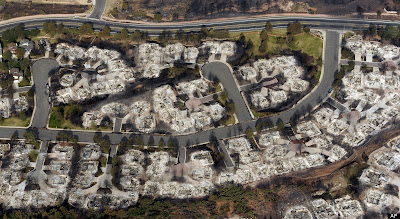 When Scott had to report for duty Friday after the Air Force Academy opened back up, his sponsor still didn't know if his home had been burned down. I don't know if base-housing had opened back up yet.

I'm so glad we had brought an earlier trailer load out here in May and got to see our new home as it should be before this fire destroyed the mountains. We'll still enjoy it, though, and the mountains will recover slowly. I hope the families who lost their homes get all the help they need to recover. In fact, I think one of my blog-communicators lived right in the canyon where this fire started, and i sure hope she's OK.

Speaking of fellow quilters, tomorrow I'll be quilt-shop hopping, and the next week I'll start visiting local guilds to find where I can fit in and to hopefully meet some new friends.  :)  Quilters are awesome.

And now on to BOMs AWAY business:

I did get two Baby Janes finished since my last in-person posting:


Have you made progress on any of your BOMs or interval projects? Link up here to show it off! :D